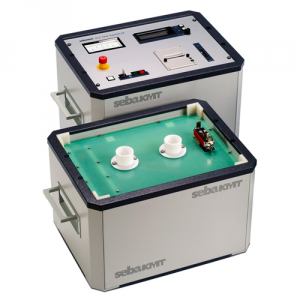 In accordance with most regulations, cables and joints must be tested after installation or repair. For this test the break-down strength of the cable is tested. The portable VLF Test System 28 kV of SebaKMT can be used to test the cables in conjunction with the according local regulations for operating voltage levels up to 15 kV for new cables and 22 kV for aged cables at 5 µ F cable capacity.

By using the patented SebaKMT 0.1 Hz Cosine Square Wave Voltage, weak and for further operation critical spots in PE, XLPE but also in Paper cables are brought to a controlled breakdown very fast without causing additional damage or ageing of the cable insulation.

The VLF Test System 28 kV consists of a DC source which charges the test object up to the required test voltage level and an electronic HV switch which performs the regular 5 second interval polarity change.

The change over from one polarity to the reverse one is performed with the support of the switched rectifier, an inductivity (choke) and a capacitor which is made up of the internal 0.3 µ F and the cable capacity itself. The L / C resonance circuit produces a cosine shaped voltage with slopes identical to a 50 Hz sine wave (In detail >>>).

There are no reviews yet.